Close
31
Dec 2022
naturesims_e6nx4f
Comments Off on How do Butterflies see the World?
MonarchVR, NatureSims
Permalink 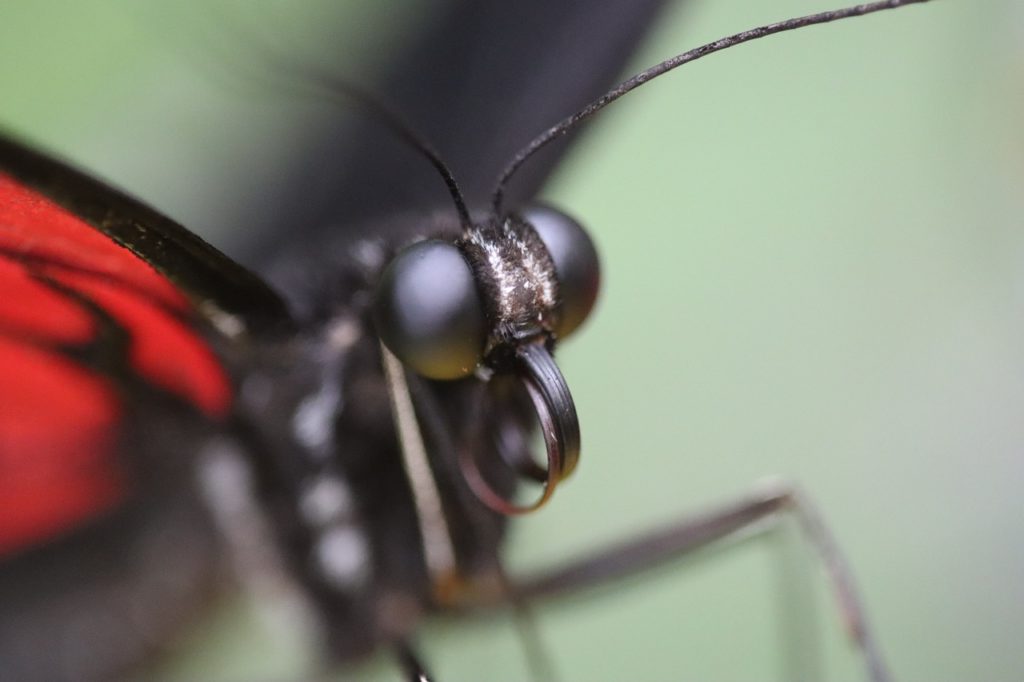 How do Butterflies see the World?

How do butterflies see the world? As humans, it’s easy to take our senses for granted, especially when it comes to vision. We have a certain level of visual acuity and perception that we consider to be “normal,” but when we look at the world from the perspective of other animals, our “normal” is just one of many possibilities.

Take visual acuity. Hold your arm straight out in front of you with your thumb pointed up As described by Ed Yong in his wonderful book, An Immense World:

“[y]our nail represents roughly 1 degree of visual space, out of the 360 degrees that surround you. You should be able to paint 60 to 70 pairs of thin black-and-white stripes on that nail and still be able to tell them apart. A human’s visual acuity, then, is somewhere between 60 and 70 cycles per degree, or cpd.”

Compare that to the wedge-tailed eagle of Australia, which has a visual acuity of 138 cpd, or over twice as many pixels as a human’s screen. This allows the eagle to spot a rat from a mile away. On the other hand, octopuses, giraffes, and horses have a visual acuity of 46, 27, and 20 cpd, respectively. By contrast, a lion’s acuity is only 13 cpd, just above the threshold of 10 cpd at which humans are considered legally blind. And many other animals, including half of all birds, most fish, and all insects, have even lower visual acuities.

What about the monarch butterfly? The visual acuity of insects with compound eyes like honeybees and butterflies is around just one cycle per degree. This means that to a monarch butterfly, the world is made up of large, blurry pixels and it’s difficult for them to see fine details, as in the image below.

But visual acuity isn’t the only factor that determines an animal’s perception of the world. The critical flicker-fusion frequency, or CFF, is a measure of how quickly an animal’s brain can process visual information, essentially the frame rate of the movie playing inside its head. It is often used as a way to compare the visual abilities of different animals, as animals with higher CFFs are able to process visual input more quickly and perceive changes in their environment more quickly.  For humans, this is around 60 frames per second; for flies, it’s up to 350. This means that to a fly, a human movie would look like a slideshow and our fastest actions would seem slow and sluggish.

The CFF of monarch butterflies is unknown, but it is likely to be higher than that of humans, as butterflies are fast-flying insects that rely on their vision for navigation and predator avoidance. In general, insects tend to have higher CFFs than larger animals, as their smaller size and faster movements require a more rapid processing of visual information.

In addition to visual acuity and CFF, the wavelengths of light that an animal can see also play a role in its perception of the world. Humans can see light in the visible spectrum, which ranges from violet to red, but other animals have different ranges. For example, many insects, like the monarch butterfly, as well as some birds can see ultraviolet light, which allows them to see details and patterns that are invisible to us. This ability helps monarchs recognize potential flower nectar sources (see image below) and is also likely why monarch butterflies have brightly colored spots on their wings: they reflect ultraviolet light and are used to attract potential mates.

Monarch eyes are also sensitive to polarized light, which is light that vibrates in a single plane. This allows monarch butterflies to navigate using the polarization patterns of the sky, a technique known as skylight polarization vision.

When we consider the monarch butterfly’s perception of the world, it’s clear that their “umwelt,” or subjective reality, is very different from ours. They see a world of blurry pixels, likely have a much faster frame rate, and can perceive ultraviolet and polarized light. It’s easy to forget that our own perception of the world is just one of many possibilities, and by understanding the unique sensory experiences of other animals, we can gain a greater appreciation for the diversity of life on Earth.